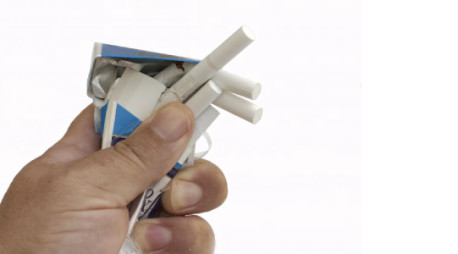 Whenever I see the colour green, I am reminded of my determination to remain a non-smoking human being. That’s one of the tricks my hypnotherapist taught me, mid – trance recently. And although I have no idea how it works, it does.

I had presented Mr Marks, a lecturer at the Institute of Clinical Hypnosis, with, he said, a typical problem – a conflict of loyalties. For obvious reasons I sincerely wanted to kick the habit, but equally, regular unlimited lighting up seemed to have become an essential to my quality of life.

I spent my hour with Marks in a light, relaxing trance while he took me through a range of different situations – imagining myself as a non – smoker and visualising smoking as something that had happened in the past. I came out of Hypnosis feeling sleepy but clear-headed – entirely free, both of the anxiety that had pervaded the last three or four days, and of any but the most distant desire to have a cigarette. And the feeling continued through working days, visits to pubs and restaurants. I wasn’t smoking and I didn’t mind a bit.

The use of Hypnosis in health care started in Europe with Dr Franz Mesmer`s discovery of the healing power of “animal magnetism”, also known as Mesmerism, 1775. From the early 19th century onwards, surgeons in Britain and France have reported experiences of performing seemingly painless dentistry and surgery using hypnosis. But it was not until the 1990s that researchers began to test for other health benefits of getting into a trance – and came up trumps.

In the early 1990s a study of stopping smoking suggested that hypnotherapy might be dramatically more successful than other therapies (New Scientist, October 31 1992). Hypnosis was also found useful when used alongside cognitive behavioural therapy (CBT) in the treatment of hyperactive children ( J Consult Clin Psychol, April 1995), as well as in weight reduction ( Ibid, June 1996). A meta – analysis comparing CBT to CBT supplemented by hypnosis (International Journal of Clinical Hypnosis, October 2000) showed a clear benefit from the supplemented treatment.

Most spectacular it seems, it seems, has been the use of Hypnosis in treating irritable bowel syndrome. Over more than two decades the successes of South Manchester gastroenterologist, Dr Peter Whorwell, have spawned a devoted following of IBS hynotherapists (ibs-register.co.uk). A recent audit of the hospital hypnotherapy unit’s first 250 patients (Am J Gastroenterol, April 2002) shows why. After five years, 83% of those treated are reported as remaining well, with 59% apparently requiring no further medication at all. Controlled trials still remain to be done, and the condition does resolve by itself, so the exact value of hypnotherapy over placebo remains unclear.

Hypnosis, Dr Whorwell explains, “not only helps the symptoms of IBS but also significantly improves quality of life and …relieves the additional symptoms from which so many patients with IBS suffer such as nausea, lethargy, backache, and urinary problems. This is in sharp contrast to the medications currently available for IBS, which often alleviate only one or two symptoms if any.” According to Dr Whorwell, hypnosis doesn’t work just by reducing anxiety, it changes the way the gut functions so it becomes much closer to normal. All of this suggests that the hypnosis treatment (which is time-intensive, 12 sessions per patient treatment) may be cost effective in comparison with other treatments within two years. “As new and more expensive drugs reach the market,” Whorwell remarks, “hypnotherapy should, by comparison, become even more financially viable.

It’s not all roses round the door, however. Hypnosis was one of the “questionable” techniques that over-enthusiastic psychiatrists used to implant memories of child abuse in the early 1990s (Br Jpsychiat, April 1998). ” The problem is that hypnotherapy is all about effective communication and so its very important that the therapist behaves in an entirely ethical manner,” comments Marks. The communication bit is all too true, I concluded. Probably Marks` most effective strike for me was in his pre-trance chat – when he told me in his slow careful voice that smoking is not an addiction, just a silly habit. The strange thing is that while I have (reluctantly) let people smoke in my kitchen since giving up, I can’t abide anyone saying that nicotine has addictive qualities. “Go and say that in the garden”
I tell them.